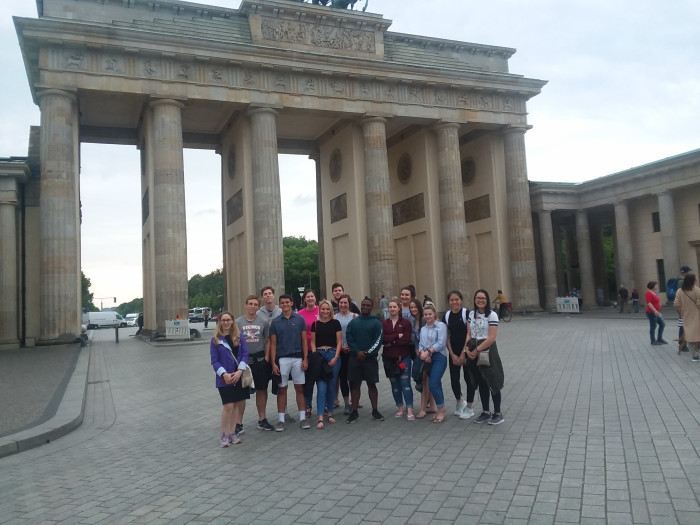 Ursinus students on the Economies in Transition study abroad trip stand in front of the Brandenburg Gate in Berlin.
HomepageBusiness and EconomicsThe World as an Economic Classroom

The World as an Economic Classroom

A group of Ursinus students and faculty are learning first-hand about the transition of Central and Eastern European economies from central planning to market-oriented institutions.
May 24, 2019

Nearly two decades after the collapse of communism, how are the economies of former Soviet-satellite countries faring? A group of 14 Ursinus students – led by two Business and Economics department faculty – are on location finding out now.

Through the department’s Economies in Transition (ECON-223) course, students are meeting and learning from entrepreneurs, scholars, and policy makers in four formerly communist countries. The countries have made – and are continuing to make – the transition from central planning to more market-oriented systems. The three-week trip includes visits to Bucharest, Romania; Budapest, Hungary; Prague, Czech Republic; and Berlin, Germany.

Following an intensive preparation that started immediately after spring final exams, the students and their faculty leaders flew to Europe for three weeks of on-the-ground learning. In addition to meeting with experts, activities include walking tours, visits to historical museums and cultural centers, film screenings, conferences at local universities, and theatrical productions.The course will culminate with students producing a formal study comparing and contrasting the institutional environments of two transition economies of their choosing. Each study will detail the historical, economic, political, entrepreneurial, and socio-cultural backgrounds of the two chosen countries.

The field trip component of the course was developed by assistant professor Olga Nicoara and is being led by Nicoara and professor Andrew Economopoulos.

At Baccalaureate, Graduates Turn to Words of Faith and Tradition