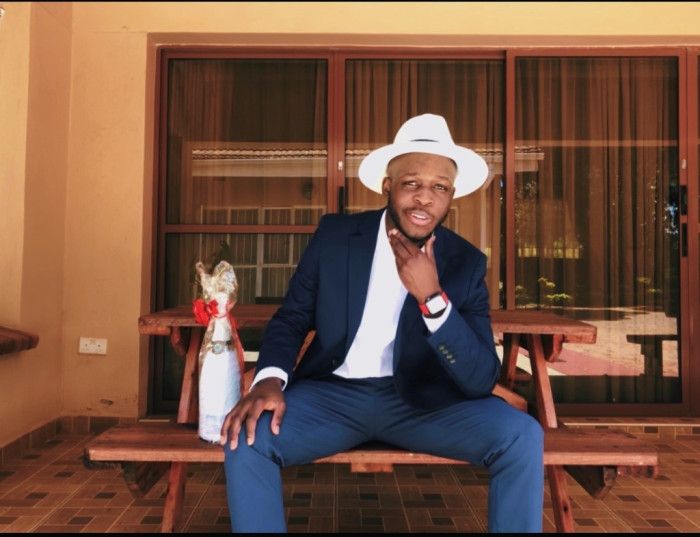 A Home Away from Home

Senior Simba Kanjanda’s path from Zimbabwe to Ursinus wasn’t as circuitous as one might imagine, but a bit of circumstance certainly helped him to find the perfect school.
by Andy Edwards July 15, 2021

As a student at St. George’s College, a private Jesuit boys’ high school in Harare, Kanjanda ’22 had designs on going overseas for university. Europe or Australia were more likely destinations due to the Zimbabwean private school system’s use of Cambridge Assessment International Education, which provides international college qualifications and is closely aligned with institutions of higher learning in the United Kingdom, European Union, Canada, and many other parts of the world. Having to take the SATs privately out of school deters many Zimbabweans, who typically matriculate to America through athletics.

That was the case for Kanjanda, whose primary school and club soccer coach had connections in the U.S. and put Kanjanda in touch with the dean at The Peddie School. Kanjanda was accepted to the New Jersey-based prep school as a postgraduate and made the journey to the United States for the first time.

“As someone who is well rounded in sport, academics and other extracurricular activities, I felt the USA was a destination that would enhance and fulfill my full potential and abilities,” he said.

Kanjanda’s experience at Peddie, an elite boarding school, made him think more about the possibility of staying in the States for college. He met with an advisor, who came across Ursinus in the book Colleges That Change Lives. How prescient that turned out to be.

Kanjanda had never heard of Ursinus, but its proximity to Peddie made it a worthwhile visit. An accomplished youth tennis and soccer player in Zimbabwe, he arranged meetings with coaches Pete Smith (men’s and women’s tennis) and Keith Cappo (men’s soccer), and his visit vaulted Ursinus to his top choice. 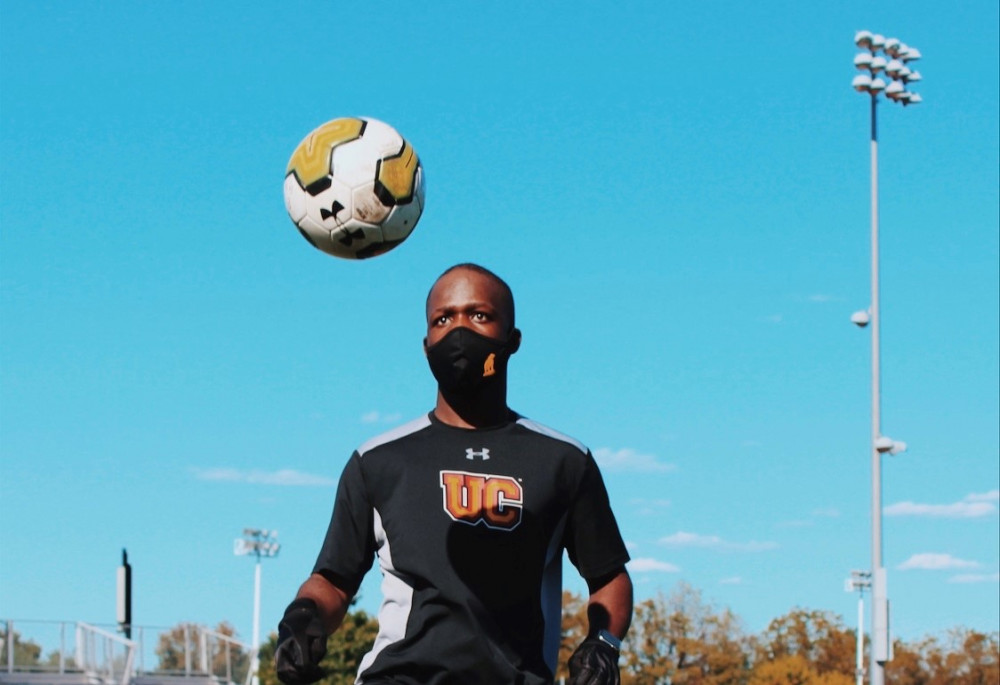 Kanjanda was drawn to Ursinus for a long list of reasons, each of which seemed to fit perfectly with his experiences and dreams. An aspiring surgeon, the school’s reputation for top-tier science and pre-med programming was a major selling point, as were the small campus size, intimate student-teacher ratio, and the ability to continue with his athletic pursuits.

“(All of it) gave me a hospitable impression of a close-knit community where I could form deep and meaningful bonds, not only with my fellow Bears but with my faculty as well. I could also continue to play sports in one of the most competitive Division III conferences without compromising on my education.” 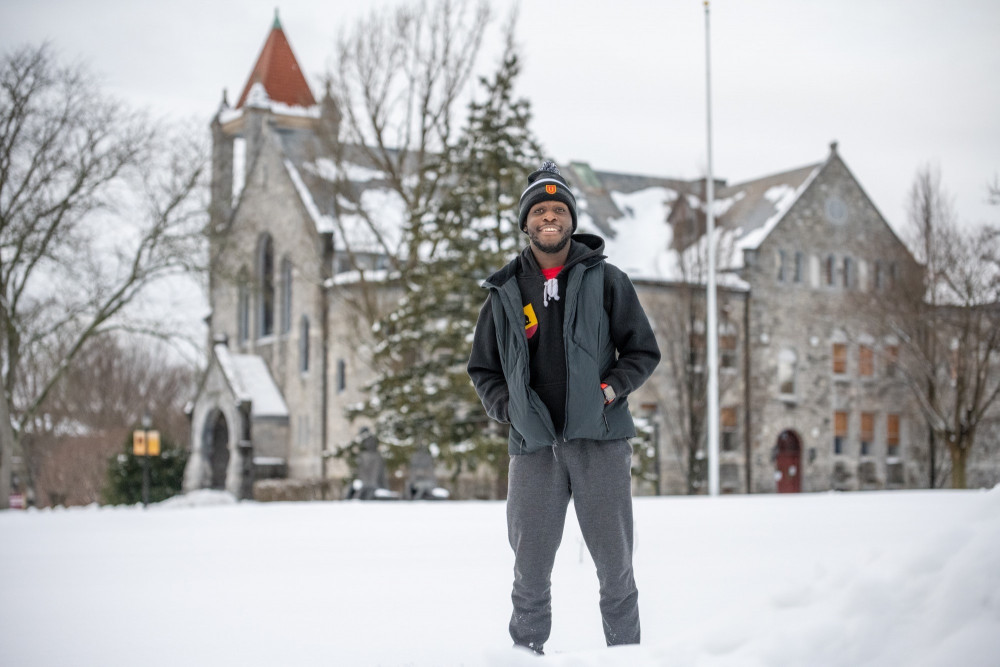 Kanjanda was impressed by the Common Intellectual Experience and the core values based on the four questions, and the prospect of studying abroad and participating in the Watson Fellowship were particularly appealing. The beauty of campus and its proximity to major metropolitan areas were also enticing to a new American student.

Kanjanda has capitalized on every opportunity and then some since enrolling at Ursinus. In addition to being a Melrose Fellow, he also serves as a resident advisor and chapel leader. Kanjanda is a member of a number of clubs and student groups, including Students Today Alumni Tomorrow; the Brownback-Anders Pre-Health Society; International Exchange Committee, chess club, and the Student-Athlete Advisory Committee. A biology major on the pre-med track, Kanjanda has been helping with the college’s contact tracing efforts throughout the pandemic as a member of the Health Corps.

Kanjanda plays on the men’s soccer and men’s tennis teams at Ursinus, carving out a leadership role on both squads. He had won 10 of his 12 matches during the pandemic-shortened 2020 tennis campaign and has made the Centennial Conference Academic Honor Roll for both sports every semester he’s been eligible.

“During his time here at Ursinus, Simba has immersed himself in many things on the field, on the court, in the classroom and in the community,” said Cappo. “He has amazed me with his ability to contribute positively to everything he is involved in and balance them in a way to have an impactful and fulfilling experience which will surely prepare him for the next chapter in his life.”

Kanjanda, whose entire family remains in Zimbabwe, tries to return every winter and summer. This past winter, he managed to get home for two weeks, the first time he had seen his relatives in a year. Despite some bouts with homesickness, Kanjanda credits the freedom of being alone in a new country with expanding his worldview and fueling his quest for learning and personal growth.

“I love being independent and growing on my own,” Kanjanda says. “I have also been to over 15 countries, so I really appreciate different environments and continuously learning.”

Now hurtling through his junior year, Kanjanda remains thrilled he decided to go to college some 8,000 miles from home.

“Ursinus has not disappointed,” Kanjanda says. “I have loved my stay here and each semester gets even better. I constantly discover new opportunities and revelations about myself as an academic and as a person. The school promotes good values. Most importantly, I have managed to build very strong relationships and connections with many people, which I am very grateful for. Ursinus has become a home away from home.”

What brings you joy?

Sharing and partaking in life experiences that bring out the best in me and others brings me the most joy. I value relationships and service. I believe that the meaningful interactions among us give meaning to life.

What do you think is most unique about your story?

I think that what is most unique about my story is perspective. I have been fortunate enough to experience the world in different places, with different people and in different ways. This exposure has come along with a deep appreciation and understanding of how we should live together.

What is your definition of a “Bear for Life?”

Adopting, embracing and applying the many skills and knowledge that Ursinus breeds throughout life is my definition of a “Bear for Life.” Maintaining and developing connections and relationships made during time at the college also exemplifies what it means to be a “Bear for Life” to me.

Celebrate with UC at Homecoming 2021

Twice in a Generation