This award recognizes an individual who has reached significant professional achievements through exemplary leadership. Achievements may be specific to a chosen career, industry on entrepreneurial quest. Consideration is also given to the nominee’s contributions to his or her community and the College. 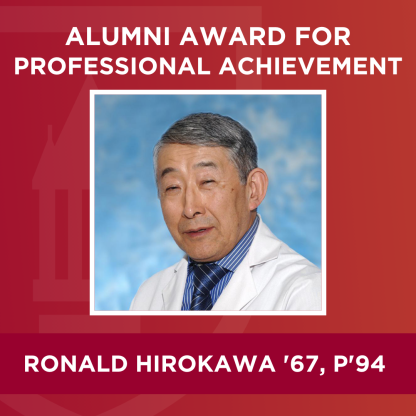 Ronald Hisao Hirokawa, M.D., F.A.C.S. graduated from Ursinus in 1967. Dr. Hirokawa has spent nearly five decades practicing medicine in the field of otolaryngology. He spent 13 of those years in service to the United State Navy. A widely respected leader in his field and also as a top educator of doctors, he is still practicing medicine with limited hours at his home in New Haven, Connecticut.

Dr. Hirokawa’s interest in a medical career began at Ursinus. Ron grew up on a farm in Southeastern Pennsylvania and came to UC with a strong work ethic and a desire to serve his community. He was an officer in the Social Responsibilities Commission, a group that was dedicated to organizing volunteer opportunities for Ursinus students. He spent his junior year studying abroad at Heidelberg University in Germany. When Ron returned, he was focused and ready to pursue a life in medicine. As a senior, Ron received the Senior Alumni Award for displaying outstanding leadership qualities in his time at UC.

After earning his M.D. at Jefferson Medical College, Ron served as a doctor the U.S. Navy. The majority of this time was spent in Bethesda, Maryland, where he eventually chaired the Department of Otolaryngology at the National Naval Medical Center.

When Dr. Hirokawa is not practicing medicine, he enjoys spending time connecting with his family. He’s learned to play squash with his son, Craig, he builds model trains and airplanes, and goes ballroom dancing with his wife Jean. Ron is an avid follower of his grandchildren’s athletic endeavors: he is the official score keeper for his grandson’s baseball team.

How is winning an Alumni Award significant for you personally and professionally?

It is an honor to be named recipient of this award in recognition for the years of hard work and effort to achieve a level of achievement in my field. Personally, it is an honor to be awarded this Alumni Award, because Ursinus educated me well, opened up new opportunities for me, and now has given me recognition. I appreciate that so much.

How did Ursinus College prepare you for your career?

My four years at Ursinus College helped to broaden my view of the world and to begin to realize that there are opportunities to be had, and risks to be taken. When I first entered Ursinus College, I knew that I was interested in the sciences, but I had not decided on a specific area in the field. Having grown up on a farm, in a small town, I had limited knowledge as to what was available, as well as what my ethnic experience would allow me to pursue. During my junior year of college, I was encouraged to apply for and participate in the Junior Year Abroad program at the University of Heidelberg in Germany. This was an opportunity to take a risk - meet many diverse new people and be exposed to new interests, and feel comfortable in finding my own interests. I returned to Ursinus and, again, with encouragement, knew that I was ready to try for more.

How have your Ursinus mentors shaped your role as a leader in your industry?

There were many individuals who helped me pursue my vocation in the field of medicine and develop leadership qualities. As it has been fifty-five years since I graduated from Ursinus college, many of my mentors are no longer available to personally recognize. However three individuals stand out in my mind in helping to shape my career, not only to determine and develop my field of interest, but have also to shape the type of person that I have become. First, I would mention Dr. Paul Wagner, who was my premedical education advisor, and who encouraged me and helped me to apply to medical school.. Next would be Dean Rothenberger, who was the Dean of Women at that time. I became acquainted with Dean Rothenberger while I served as a waiter in the faculty dining room. Dean Rothenberger was a very kind, well respected, yet humble person and was an excellent role model. Dr. Donald Helffrich was the president of Ursinus College at that time. He personally encouraged me to pursue my goals no matter what the obstacle. I recall him telling me to “go right to the top to get the answers to my questions” and not be afraid to ask anyone for answers. President Helffrich supported my application to join the Junior Year Abroad program at Heidelberg University in Germany and that experience was significant in molding my life in so many ways.

What has been your proudest contribution to your professional community?

Medicine has been a very satisfactory profession. I have been proud of my accomplishments in caring for many patients. Their medical outcomes are quite rewarding, but more importantly, their appreciation for the care they received is by far the most rewarding aspect in the field of medicine.

In addition to my medical practice, I have enjoyed the academic side of medicine; teaching students and young surgical residents at Yale and Saint Raphael Hospitals here in the New Haven. Teaching skills in the operating room, imparting academic knowledge through lectures, and helping them to develop from young inexperienced students to mature and experienced physicians/surgeons in my area of medical expertise - Otolaryngology and Head and Neck Surgery - has been, for me, a source of great satisfaction. I continue to be in contact with many of my residents. As part of this program, I was honored to receive on two occasions the “Teacher of the Year Award” for the Yale residency program.

What was your proudest UC moment?

I was elected one of the permanent class officers, I had lettered in baseball, I had made lifelong friends, I knew where I was going next, I was confident that I could do it and, above all, my parents were proud of me as one of the first in our family to graduate from college - graduation was my proudest moment!