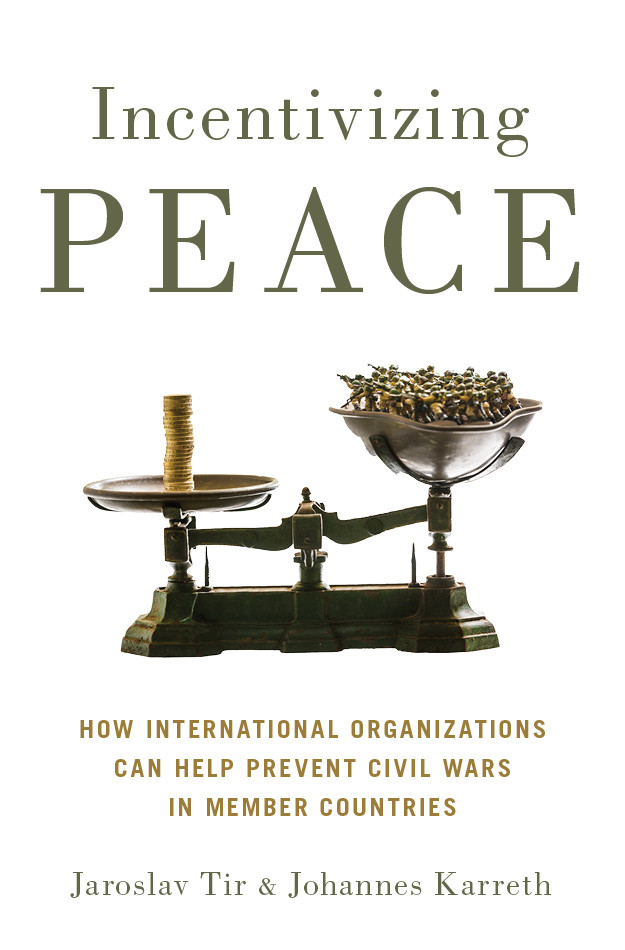 Civil wars are one of the most pressing problems in international politics, and common approaches to conflict resolution too often fall short in preventing them. But according to Karreth, an assistant professor of politics and international relations, certain international organizations can be quite effective at keeping the peace.

He is the author of Incentivizing Peace: How International Organizations Can Help Prevent Civil Wars in Member Countries (Oxford University Press, 2018), co-written with Jaroslav Tir, a professor of political science at the University of Colorado Boulder.

The authors say that countries belonging to highly-structured intergovernmental organizations (IGOs) face a significantly lower risk that emerging low-level armed conflicts on their territories will escalate to full-scale civil wars.

“The book focuses on certain organizations, such as the World Bank, that engage with member countries and have a very strong self-interest that these wars don’t escalate because if they do, they could really threaten the resources that these organizations have invested in the countries,” Karreth says.

Analysis of more than 260 low-level armed conflicts that have occurred around the globe since World War II supports this hypothesis and Karreth says, “On average, when countries are involved with more of these organizations, conflicts were substantially less likely to escalate.”

Case studies from Indonesia’s East Timor conflict in the late 1990s, Ivory Coast’s post-2010 election crisis and from the early stages of the conflict in Syria in 2011 provide evidence that memberships in highly-structured IGOs are key to understanding why some low-level armed conflicts escalate to civil wars and others do not, he says.

For example, Karreth says, “East Timor at the time saw the rise of an independence movement and there was quite a bit of initial violence at that time, as the Indonesian military threatened to crack down and stifle that movement with brute force. But then, several IGOs stepped in and made it very clear that further escalation would result in withdraw of resources. The government and the opposition both eventually responded to these signals. While people died during the initial violence, East Timor avoided what could have been much a much larger and deadlier civil war.”

“What really matters is tangible resources,” Karreth says. “Mediation can be helpful, and considering the use of United Nations peacekeeping forces can be helpful, but traditional approaches to conflict management take time. That’s why we really focus on incentives in this book, like multilateral aid, access to international markets, or other resources international organizations provide.”

Increasingly, these organizations have dedicated more resources to research on violent conflict, Karreth says, and have used their influence to a varying degree to prevent escalation.

“They have to be neutral and they have no political mandate,” he says of these IGOs. “They cannot take a side. All they can do is address any threats to their mandate. If a conflict threatens economic stability, for example, they can exercise some influence.”

Karreth received his doctoral degree in political science from the University of Colorado Boulder with a concentration in international relations, research methods and comparative politics. Prior to coming to Ursinus, he was an assistant professor at the Rockefeller College of Public Affairs and Policy at the University at Albany.

While the findings are always subject to further research, Karreth cautions, the authors used a variety of social scientific methods to account for alternative explanations. “What we find is also pretty consistent with a larger literature on the role of incentives in armed conflict, suggesting that these IGOs really can play a helpful role here,” Karreth says. “But further research on how to best use the influence of these organizations at different phases of armed conflicts is certainly needed.”

Aside from researching and teaching international politics, he also serves as faculty adviser for the Ursinus delegation to the annual National Model United Nations conference in New York. —By Ed Moorhouse