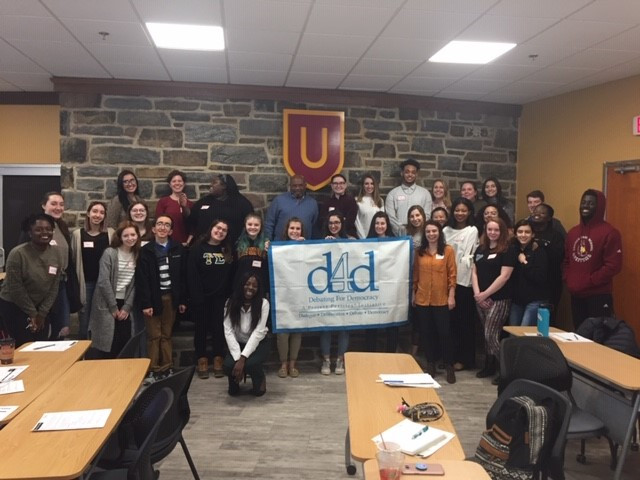 In an increasingly socio-politically-active culture, especially on college campuses, it can be easy to find oneself filled with passion about a cause. It can be significantly more challenging to channel that motivation into concrete progress. On February 23, a group gathered in the Bears’ Den to change that by participating in the Project Pericles workshop D4D (Debating for Democracy) On the Road.

Included in the group were Ursinus Bonner leaders, Feminists in Action, Peer Advocates and Melrose Fellows, as well as Presidential Service Corps/Bonner leaders from Widener University, and members of the community. The groups were joined by Collegeville Mayor Aidsand “Ace” Wright-Riggins, who opened the program with a few words about his hopes for the workshop and ongoing change. Wright-Riggins said he was hopeful about the workshop’s potential to encourage “younger generations of activists to get engaged.”

The program, led at Ursinus by Midwest Academy trainer Beth Huang, focused on encouraging students to be more involved in advocacy and activism by helping teach them how to “advance their issues and to get their messages across to elected officials, fellow students, community groups, and the media,” according to the Project Pericles website. The workshop centered around a series of presentations on turning “problems” into “issues,” successfully defining that issue, building a strategy and developing tactics to accomplish a goal. It also focused on evaluating types of power and how they can be used to create change.

“I was most intrigued by the amount of work and planning that goes into each and every social and political justice movement we see today,” says Jane Krol ’21, a Bonner leader and peer advocate at Ursinus. “Behind every campaign are layers upon layers of delegated positions, all of which require outreach, decision making, and—most importantly—a defined issue that is both winnable and worthwhile.”

She also enjoyed working with Widener students, “who offered insightful contributions to our discussion and helped enhance the element of diversity in thought that is prevalent in many, if not all, campaign and activist groups.”

After the presentations, participants split into smaller groups, each focused on a specific problem. Among these problems were the immigration crisis, LGBTQ+ discrimination, food deserts and hunger, healthcare inequality and mass incarceration. Using the training from the presentation, the groups narrowed down these problems into winnable issues, such as securing gender-neutral bathrooms on campus, or bringing supermarkets to a local area designated as a food desert.

Participants worked together to develop a strategy for accomplishing this goal, complete with evaluations of power needed and a plan for escalating tactics. While the workshop had started with all the participants sharing a broad problem that they were passionate about, by the end of the workshop, each group had created a viable plan for concrete change in the community that went beyond recognizing a problem and towards solving it.

“I think the D4D workshop is invaluable for our students. It is easy for us to become agitated about things we perceive as injustices, but it is not often the case that we turn this agitation into a winnable campaign that can capture the attention of a legislator about the issue we care about,” says Assistant Dean of Civic Engagement Christian Rice. “Social change doesn’t just happen. It requires hard work and a well-conceived strategy, and this is what the D4D workshop makes clear to our students.” —By Thea Pastras ’21