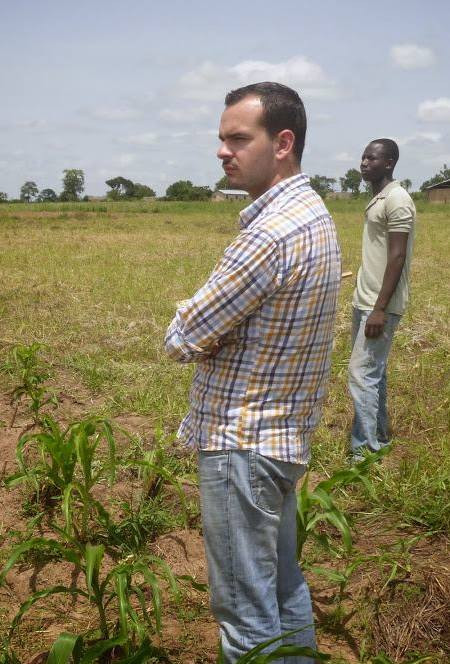 Ryan Welby, Class of 2013, is a Peace Corps volunteer who is going beyond his assignment by embarking on a plan to build a school.
October 22, 2014

As Ryan Welby 2013 works to improve people’s lives as a Peace Corps volunteer in Togo, Africa, he has realized that change must begin with a solid education. And so, he is on a mission to provide that foundation.

Welby, who was an International Relations major  and Politics minor, arrived in Haloukpaboundou in Togo, Africa, the summer after his graduation. The village had no running water or electricity. Home to 2,500 people, Haloukpaboundou spans approximately 25,000 acres.  At the center of the village there is a town market and a river where people swim and bathe. The residents, who speak French and Kabye, live in simple mud houses.

“The first thing I have to do every morning is retrieve water for the day from a well near my home,” he explains. Welby’s assignment was to teach local farmers sustainable farming techniques. But he soon realized that while he could teach new practices, much of what he taught would have more impact if there was an emphasis on thinking critically, so the farmers themselves could better assess issues that came up. To improve the educational system overall, the first step was to improve the infrastructure. Welby decided to take action and has spearheaded a plan to build a new school to replace one of the three elementary schools in the village.

The current school is made up of a series of dilapidated, thatched, shed-like structures, he says. The huts have poor sanitation and often wild animals make their way inside. The new school Welby hopes to build will be much more conducive to learning – animal-free, made of concrete, with larger classrooms. “My goal,” says Welby, “is to empower and educate my community so that they can assess, predict, and solve problems on their own.”

Welby’s passion did not surprise his former professor, the Hon. Joseph Melrose 1966, former Ambassador to Sierra Leone, who has spent time for both the U.N. and State Department, in West Africa. Melrose, professor of politics and international relations, calls Welby an ideal Peace Corps volunteer.  “In class I found him to have a strong interest in learning about other cultures and how they developed and function,” says Melrose. “He took advantage of all opportunities to learn about them and was willing to accept them on their own terms.  A successful Peace Corps volunteer must be able to relate to the people on their own terms and within their frame of reference.”

Welby is raising money for the new school, which will be partially funded by the Harleysville, Pa.,  Lions Club. Plans are to break ground in January, and he hopes the school will be finished before his Peace Corps assignment ends in August.

In the meantime, Welby’s days are spent running several after-school clubs and a community garden, which serves as a lecture and demonstration center for improved agricultural practices. He also teaches English five days a week and works in the local clinic. Welby eats every meal with his host family, who prepare traditional Togolese food twice a day. “I try to help them cook,” he says. “But I still kind of get in the way.”

Welby hopes to teach in Southeast Asia following his Peace Corps service, and has his eye on law school to study international law and agriculture development.

This past spring Welby returned to the Ursinus campus to attend a ceremony that launched the Peace Corps Preparatory Program on campus. He’s thrilled that Ursinus is one of the 14 colleges and universities in the U.S. participating. The program is directed by Professor Melrose and Assistant Dean for Civic Engagement Christian Rice 1998. Schools are selected for the program based on their demonstrated interest in promoting international learning and service opportunities to their students.

“There are a number of extremely talented students at UC who want to make an impact in the global community and the Peace Corps is an excellent conduit to do so,” Welby says. “My time in Togo helped me shed my insecurities and give me a whole new perspective on life. I would tell any student who is considering the Peace Corps to take the plunge —  you will not regret it whatsoever.”