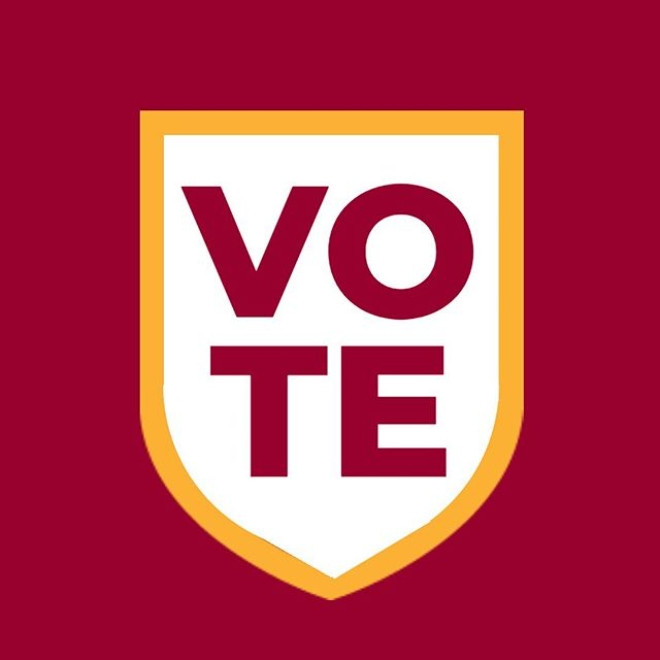 Ursins Votes logo
HomepageNewsBears Work to Get Out the Vote

Bears Work to Get Out the Vote

Ursinus Leads the Vote is a new student-led, nonpartisan initiative focused on ensuring that the campus community is informed and prepared to vote in November’s presidential election.
October 16, 2020

As the associate director of the Ursinus Center for Advocacy, Responsibility and Engagement (UCARE), Katie Turek is used to working with the campus community to register our nation’s newest voters and help them navigate the voting process. This year, she knew she had to alter her approach.

“The convergence of COVID-19 and the presidential election made it very clear that we needed to both ramp up our efforts and get more creative in the ways we are engaging campus,” says Turek. What’s more, the Kaleidoscope Performing Arts Center was removed as a polling location due to the pandemic.

Initially, South Elementary School was named the alternate polling place for students and community members, but longtime Collegeville firefighter Rowan Keenan had a better idea. Keenan, who is a lawyer, owns the former Key Bank building on Main Street with three of his partners at Keenan Law. “Rowan offered it as a walkable alternative to the campus and residents,” says Collegeville Council President Cathy Kernen. “The building is vacant, and the Keenan Law partners went out of their way at their own expense to provide heat, electricity and everything needed to convert the large, empty bank to a socially distanced, safe [polling center] for the students, residents and poll workers.”

Students working with Turek as part of the Ursinus Leads the Vote group have been leading the charge to make sure students are informed of important voting details, such as the new location. Other initiatives include a voter registration table in Olin Plaza every weekday; pop-up voter registration events; Democracy Matters events, which typically consist of movie nights (“John Lewis: Good Trouble” was one selection); and a virtual Q&A and voting-trivia event with Elections Judge Robert Botti. “Thoughtfully planned events like these engage the campus in fun ways and create hype around the election,” says Turek.

Online efforts—which serve in part as a way to engage students who are remote this semester—have included the creation of an @ursinusvotes Instagram account and an Ursinus Votes page on Canvas. “Students utilize these tools, along with e-mails and texts, to remind the campus of important deadlines and share nonpartisan voting information and resources,” says Turek, who—along with Associate Dean of Student Life and Director of Student Activities Todd McKinney—will be hosting an Instagram Live event titled “What’s the Tea on Voting.” Politics professors Johannes and Ann Karreth have also created short videos about voting that will be shared on the @ursinusvotes Instagram account.

Mekha Varghese ’23, a biochemistry and molecular biology and art double major from Waldwick, N.J., says that the nonpartisan organization boasts students from all class years and a wide variety of majors. One of their goals, which leverages the grassroots model of outreach, was to recruit “Voting Captains” who are “leaders of student groups who help advocate for voter registration within their circles,” says Varghese. Captains ensure everyone in their group is registered to vote and they remind people to vote on Tuesday, Nov. 3.

Among those captains are student-athletes who represent their teams. In addition to on-campus efforts to promote good citizenship through voting, the Centennial Conference is encouraging 100 percent voter registration for all eligible student-athletes, coaches and staff at its member institutions. Field hockey, men’s and women’s swimming, women’s soccer, and volleyball are among the Ursinus teams that have already reached that goal.

“We’re so grateful to have received a positive reaction from both students and faculty, and we look forwarding to collaborating with different organizations on campus as the election draws closer,” says Varghese. “Pennsylvania will be pivotal to this year’s election, so we want to maximize student participation and let students know that their vote really matters.”

Overall, Turek has seen an increase in student engagement and awareness around elections and political advocacy on campus in recent years. “We saw a significant increase in the number of students who registered for UCARE’s Debating for Democracy (D4D) event offered through our affiliation with Project Pericles in February 2016, and that increase in participation has sustained itself since then,” she says. “D4D is described as a hands-on advocacy and activism workshop that helps students learn how to effectively advocate for causes they care about.” Additionally, according to the National Study of Learning, Voting, and Engagement (NSLVE), Ursinus’s overall voting rate in 2016 was 52.3% (up from 37.5% in 2012). Compared with the other institutions included in NSLVE, our overall voting rate in 2016 was 1.9% higher than the average.

Celebrate with UC at Homecoming 2021