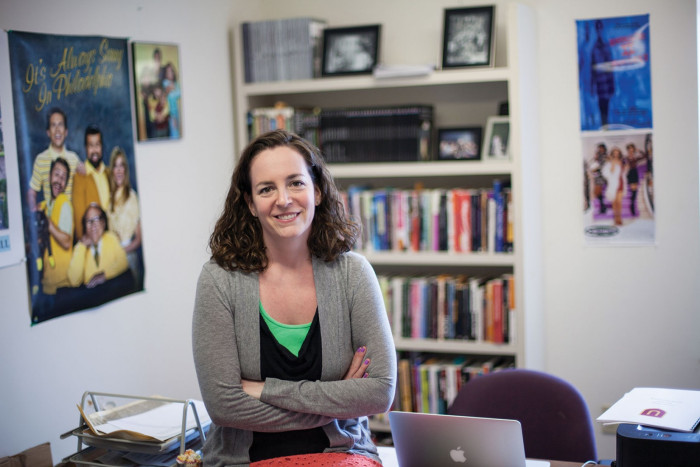 Leppert, who said she grew up “in the 80s on a steady diet of MTV” and has been fascinated by celebrity culture since she was a child, has been involved with the Celebrity Studies Journal in a variety of capacities since its launch in 2010. She has published in it, peer-reviewed for it, and co-edited a special issue on reality TV celebrity with Erin Meyers, an associate professor of communication at Oakland University who is also her co-editor of the journal.

“It’s an exciting opportunity to help shape the field and see all the impressive work being done on celebrity around the world,” said Leppert of her new role.

“Scholars approach celebrity in a variety of ways,” said Leppert, who teaches a class on Hollywood stardom and celebrity culture. “A lot of celebrity studies grew out of film studies, but we also publish scholars coming from cultural studies, media and communication studies, gender studies, English, philosophy, and history.”

While growing up, in addition to being obsessed with 80s music icons like Madonna, Guns N’ Roses, Prince, and Poison, Leppert said she also “somehow got hooked on the classical Hollywood film actress Katharine Hepburn.” While in elementary school, she had a cardboard cutout of the actress in her bedroom, and she would scour TV Guide each week to find out if any of her movies were airing.

“My own scholarship on celebrity is pretty varied in focus,” said Leppert. “I’ve written about a Hong Kong film star, the cast of Friends, and about how reality TV has reshaped our understanding of celebrity.

“I think celebrity has infiltrated most aspects of our lives, especially in the social-media era where we’re expected to put a carefully constructed image of ourselves out in the world for public consumption. Of course, we’re also drawn to celebrity for the gossip, the schadenfreude, and for the escapist fantasies of wealth, public adoration, and luxury. But celebrities—from professional athletes, to film stars, to Instagram Influencers—also function as models for how to live our lives in a variety of ways. They help set the expectations for how we all behave at various life stages and in various identity categories.”