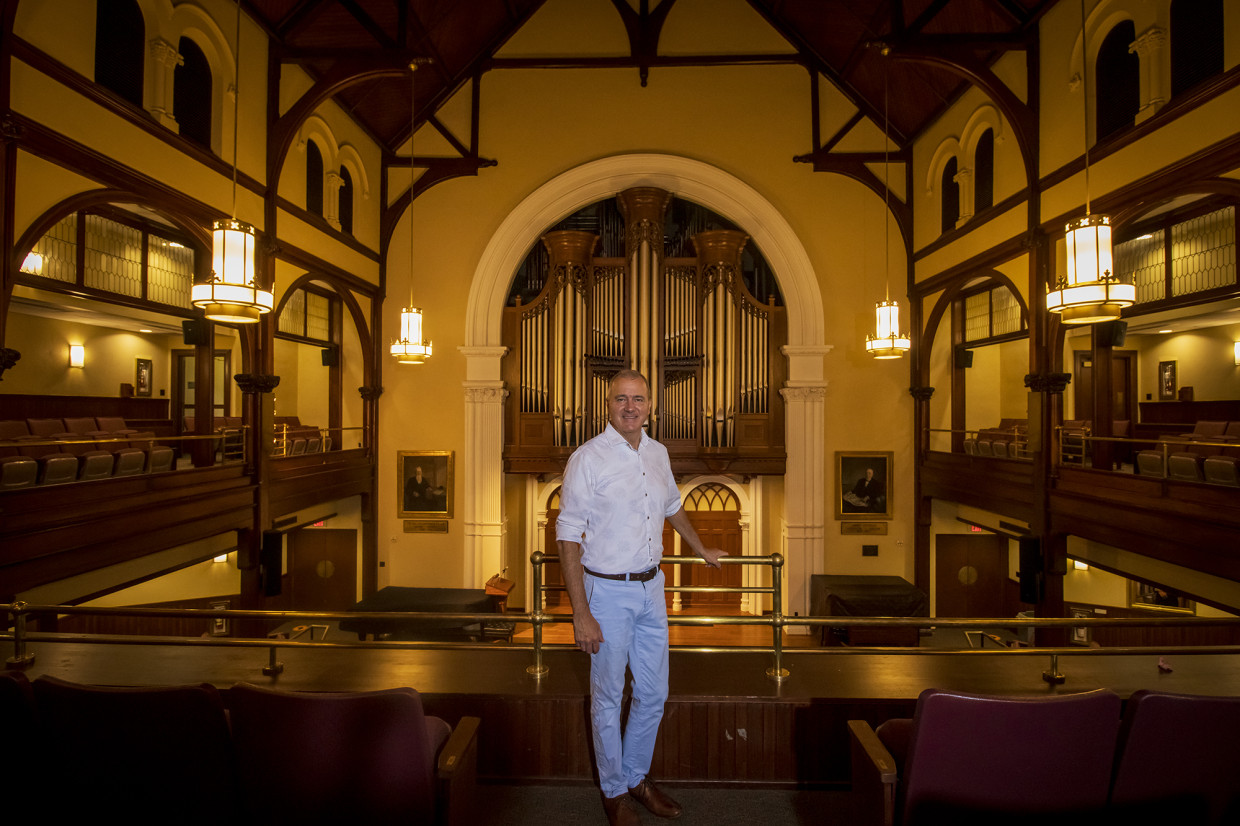 A piano player since age 4, Alan Morrison was a self-described late bloomer on the organ. He did not start serious study of the organ until he was a senior in high school. A graduate of both Philadelphia’s Curtis Institute of Music and New York’s Juilliard School of Music, Morrison has been Ursinus’s college organist for nearly 30 years. As we celebrate the 35th anniversary season of the Heefner Memorial Organ, we shine a light on the man who makes the music happen. Get to Know Alan.
November 06, 2021

He performs in Bomberger Auditorium at least twice each semester, and when he’s not in Collegeville he’s busy!

I am currently in my 20th year as chair of the organ department at Curtis, where I teach a highly select group of organ students. I also perform and serve as organist in residence at the famed Spivey Hall on the campus of Clayton State University near Atlanta, Ga. I am also a regular organist for various concerts, both solo and collaborative, at the Kimmel Center’s Verizon Hall, and I serve on occasion as organist with the Philadelphia Orchestra. I’ve played with them in Carnegie Hall and at their summer home in Saratoga, N.Y. Aside from that, I have performed regularly across the country and beyond under the management of Karen McFarlane Artists, Inc. since 1996.

After a two-part audition performance, Alan signed his contract on President Richter’s last day at the college.

I had just graduated from Curtis in 1993 when I was invited to make a CD recording on the Heefner Memorial Organ. I recorded a mix of repertoire, Organ Power, which is still available on iTunes. After a follow-up solo recital, William F. Heefner ’42, a former trustee, and Professor of Music John French decided to create a position to help give the organ an identity and visibility in the area and beyond. It was such a notable installation at that time. It was important to utilize the instrument not only to draw people to Ursinus, but also to use for musical activities on campus such as recitals, choral concerts, and special events like convocation and baccalaureate ceremonies. The position came to fruition while I was at Juilliard, and I was hired on the very last day of former President Richard Richter’s tenure. I remember walking into his office to sign my contract and the room was filled with boxes ready to move! He and his wife, Margot, were great supporters of the organ.

Getting to know each organ’s unique style is what he loves most about performing.

What fascinates me the most is the vast differences of style and personalities found in pipe organs. Each one is handmade and possesses a distinct personality that comes to life under the right hands. Some of the most beautiful instruments can be quite small. Some contain a distinct “accent” which can completely dictate the repertoire played on each instrument, while others are more eclectic. The Heefner organ fits this latter category allowing for music of any period (medieval/Renaissance, Baroque, classical, Romantic, and contemporary) to be played.

Talent at the keys runs in the family: Some of his most memorable performances at Ursinus were duo concerts with his mother.

It has been an absolute joy working with John French and the college choir. It’s wonderful to bring the community together to learn, sing, and listen, and to bring hope and comfort through music. Other memorable events in Bomberger include several duo concerts (piano and organ) with my mother, Jeannine Romer Morrison. I’ve always enjoyed collaborative concerts and hope to also perform again with Department Chair and Professor of Music Holly Hubbs (hint, hint!).

The devastating 2019 fire at Notre Dame de Paris cathedral put one of his dreams on hold.

I was scheduled to make my Paris debut in a formal evening concert at Notre Dame de Paris the summer it burned. I’ve played numerous organs in France, but the history of that cathedral, particularly from a musical standpoint, is remarkable. The organ was saved, but it will be years before the building restoration is complete. Hopefully they will honor my contract, and I’ll get to experience that magnificent organ formally, but it could be many years down the road.

My musical taste seems to mirror my culinary taste. It’s all over the place! I listen to opera or chamber music, piano, and then for the “rock” side of things I am a huge fan of Kansas, Journey, Queen, and oddly, the Talking Heads. I tend to save listening to rock for road trips or when I’m cooking. But I also enjoy artists like Ella Fitzgerald, Barbara Streisand, and Bob Marley. I appreciate almost any type of music. It’s what makes the world go round!

The Keeper of Atlanta’s Great Apes