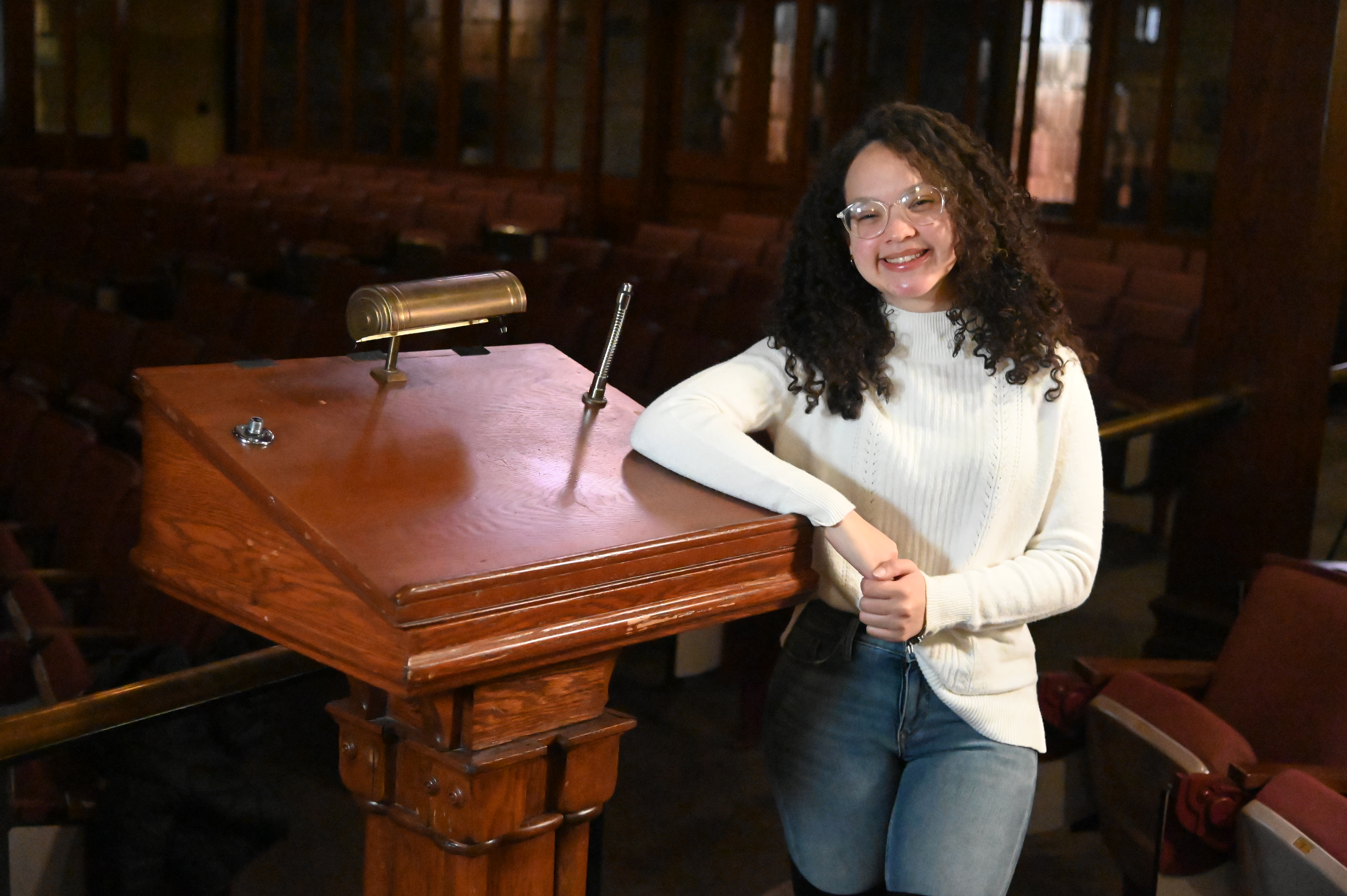 Last summer, Emelyn Rodriguez ’22 and her Bronx-based family made a five-hour trip to Washington, D.C., to move her things to the nation’s capital, where she planned to complete an internship during the fall semester. When plans for what the political science major intended to be a dream internship on Capitol Hill didn’t work out, she made the difficult decision to move—again—back to Ursinus.
by Jennifer Meininger Wolfe February 22, 2022

“I’m a first-generation student, and my family has really high expectations and high standards for me,” said Rodriguez, who was born in the Dominican Republic and moved to the United States in 2014. “It was a little bit hard on my family to know that I was no longer going to do the internship that was supposed to set me up for life and be my future. That’s how they planned it. Coming back to Ursinus I was like, ‘I cannot let “my family down. I cannot disappoint myself.’ So I started looking for internships everywhere.”

She applied to so many on Indeed.com that when she received a phone call two days later—as she was in the process of moving back to campus—she needed some help from the caller to figure out which internship was being offered. It turns out the call was from the office of Stephanie Sawyer, a criminal judge in Philadelphia.

For Rodriguez, who plans to attend law school after a gap year teaching in New York City, it was a perfect match. “I was just so interested in having an internship that would be equivalent to what I was planning to do in D.C., but on my first day I was working in court. I thought, ‘This is amazing. This is where I want to work 10 years from now.’”

Beyond making an impact in the area of criminal justice, part of her long-term plan also involves helping her community—which is no surprise coming from a Melrose Fellow who volunteers her time to teach GED classes in Montgomery County Correctional Facility. “I’m interested in bringing the community together and finding resources to help people bring out their best self.”

It is a goal that sounds a lot like the work she is already doing for Judge Sawyer. “What she does is amazing,” said Rodriguez. “She pairs up her defendants with community service, or nonprofit organizations that are willing to work with them, to lower recidivism. She doesn’t necessarily sentence them right away; she gives them a chance in life. She always says, ‘I sentence people, not charges.’” Sawyer also assists defendants with overcoming other obstacles, such as childcare needs and job placement.

“A lot of judges are just sentencing and sentencing, and not looking out for the defendants. Judge Sawyer actually has a vision for these defendants. It is so amazing to see her plan out their future and then actually follow through. We need more judges like that, especially for minorities.”

Rodriguez is a big part of the process. She attends court, identifies defendants’ hurdles, and works to build a support system of sorts. She estimates that she contacts 15 nonprofits each week in hopes of identifying ones that will work with defendants. Out of every 15 she contacts, she finds approximately two that are willing to help—and then she organizes and hosts meetings between the judge and the staff at the nonprofit. Rodriguez also seeks out employers open to hiring people with a criminal record, and facilities open to providing childcare.

“I really love that I have an impact on them. Just because I was willing to call somebody and set up a partnership with them, a person’s whole life might change. And that’s what I’m looking forward to: continuing to make change in people’s lives.”

“Emelyn has created an amazing opportunity for herself,” said Anna Marks, the pre-law coordinator. “She found this internship through sheer perseverance, sending applications to many and diverse offices. Working with Judge Sawyer has allowed Emelyn to confirm that she wants to be a lawyer and also to benefit from the wisdom of an experienced mentor. It seems to be a life- and career-shaping opportunity.”

“We have a saying: ‘If you fall once, get up twice.’ And that’s what I feel like I did when I got this internship,” said Rodriguez. “I didn’t just stay on the ground dwelling on the fact that I was not able to work on Capitol Hill. There was something out there for me; there was something better for me. I do feel like this opportunity was the one for me. I don’t think I would have enjoyed Capitol Hill as much as I enjoy going to Philadelphia and working with Judge Sawyer.”