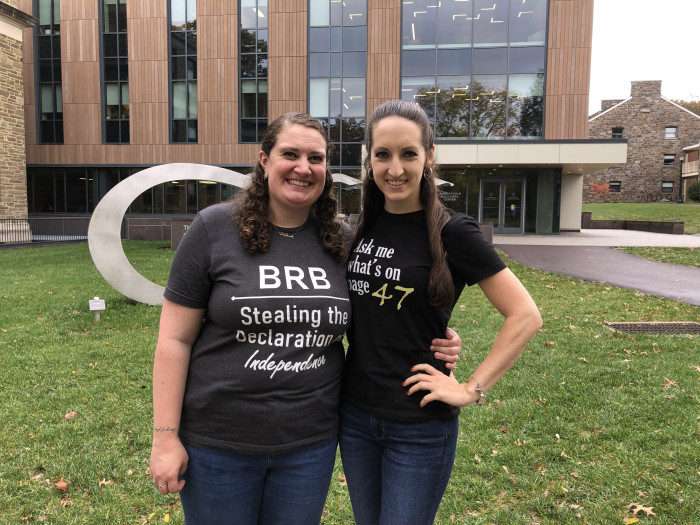 Aubrey Paris ’15 and Emily Black ’15, hosts of an award-winning podcast they say was largely inspired by their time at Ursinus, recently returned to campus to announce that they have inked a book deal for their passion project, which focuses on the National Treasure film franchise.

When interviewed for Ursinus Magazine last year, the former roommates were very clear about the impact that their Common Intellectual Experience (CIE) classes had on the podcast, titled National Treasure Hunt.

“I think we both were profoundly impacted by CIE as a class,” said Black at the time. “I was a CIE fellow for a few years and worked with first-year students to develop programs they could attend to help draw meaning from things that might not be considered super meaningful. I think that having that perspective really helped when it came to doing the podcast.”

It’s why returning to campus to speak at four CIE classes and a common event was “a dream come true,” said Paris. “Ever since starting National Treasure Hunt as a podcast, we hoped to one day bring it to Ursinus in some capacity. In 2020 when the podcast launched, we never set out to write a book, but now that we have, we consider it a huge achievement that would not have been possible without our time at Ursinus. One of our ultimate goals is to encourage current and future students to embrace CIE and the campus’s interdisciplinary ethos during their time in college and beyond.”

In addition to CIE classes, the pair also visited a film class and the U-Imagine Center. They introduced the concept of the podcast and detailed the role that Ursinus courses played in its creation. They also discussed the subsequent walking tour they created in downtown Washington, D.C., to showcase key filming and story locations featured in the National Treasure movies.

“To engage with students, we used two examples of topics we’ve grappled with on our podcast, tour, and book: the ethics of character Ben Gates’ decision to steal the Declaration of Independence, as well as the hypothesis that National Treasure—and media pieces like it—might have ushered in the trend of revisionist history that is pervasive today,” said Paris. “We hope the conversation writ large will be an interesting case study of how students can use film, TV, and other popular culture to have important or ‘big’ conversations about life and society.”

“The students were inspired by the unexpected entrepreneurial passion that Aubrey and Emily found with their National Treasure Hunt project,” said Entrepreneur-in-Residence Maureen Cumpstone. “They appreciated learning how their majors and career paths tied in with their development of the project. The students really like to connect with recent alumni and learn about their journeys, especially in this case since, without any formal business experience, Aubrey and Emily have had to learn along the way.”

“Given how much National Treasure Hunt was inspired by Ursinus, we couldn’t think of a better setting to make our first public announcement of the book,” said Paris.

National Treasure Hunt: One Step Short of Crazy will be published by Tucker DS Press, an imprint of Fayetteville Mafia Press, in April 2023. Black and Paris will review both National Treasure films scene by scene and dive into their construction: historical events that inspired plot points, science and tech tools that made the heists possible, implications of deleted scenes and other behind-the-scenes secrets, and discussions about similar franchises. National Treasure co-creators Charles Segars and Oren Aviv have written the book’s foreword.

The podcast and all it has spawned—so far—are so successful that one might think that the National Treasure Hunt franchise takes up all their time, but the hosts have full-time careers that are equally impressive: Paris is a contracted gender, climate change, and innovation policy advisor at the U.S. Department of State, and Black is a postdoctoral fellow at Temple University on a National Institute on Drug Abuse T32 training grant, as well as a visiting assistant professor of neuroscience at Haverford College.