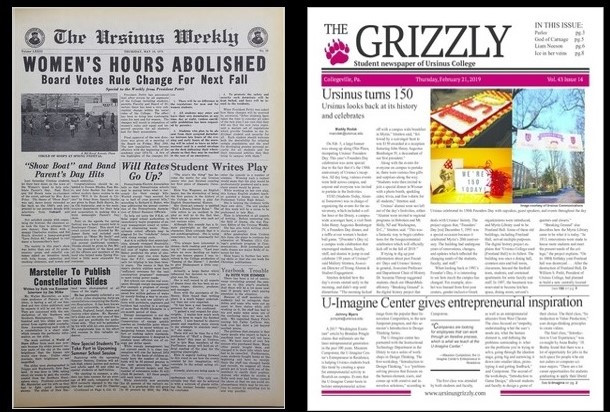 Over 3,000 issues of The Grizzly and its predecessor, The Ursinus Weekly , are ready to browse and search in the College’s digital repository.

Thanks to the hard work of many Library student assistants, 120 years of Ursinus College newspapers have been digitally scanned and posted online for browsing, searching and downloading in the Digital Commons institutional repository. Metadata, including author names, keyword subjects, and article titles, were meticulously added to each issue to aid in discovery. Each run of the newspaper is searchable individually or collectively and can be limited by date range. Every issue is downloadable as a searchable PDF document.

The newspapers provide a valuable record of student life as well as evolving curricular and educational practices and the growth of the institution itself. They also reflect the popular culture and wider events of their time. All issues of the newspaper include editorial commentary and cover athletics, performances and lectures, special events, customs and traditions, student government, faculty and alumni news, campus planning and safety, clubs and other social activities. One can also find photographs, cartoons, satire and local advertisements.

The early issues of The Ursinus Weekly, which began in 1902, are quite different from The Grizzly, which started in 1978. There is much more focus on religious life, for example, (including reporting on the School of Theology and Seminary) as well as the activities of the dominant literary societies on campus: Schaff and Zwinglian. Until the establishment of The Lantern in the 1930s, the early newspapers published short stories, poetry and prose writing in the form of literary supplements. The Ursinus Weekly was also home to the reflective writings of George Leslie Omwake for decades, first as a Dean (1908) and then as President (in his regular “Tower Window” column, 1914-1936). Other highlights include coverage of the annual May Day festivals (1919-1961) and J. D. Salinger’s column “The Skipped Diploma” (1938).

Over the decades, the newspaper continually evolved under new student editorial teams (and much less influence from the Alumni Association and administrative control boards). Greater freedom meant that students were empowered to use the pages of the publication to be more critical of the institution and its norms, challenging long held rules about mandatory religious instruction and special restrictions placed on women. The name change came in the 1970s in order to reflect a more realistic publishing schedule and, perhaps, a symbolic break with the past. In The Grizzly, one can find a publication in tune with the issues of its time, including environmental awareness, gender and sexuality, and changing technology. Greek life, a Student Union supplanted by a burgeoning Art Museum, and numerous other changes were discussed and debated throughout the years. Another Ursinus College President – Richard P. Richter – found a sounding board in its pages, contributing regular articles from 1982-1994.

In the first issue of The Ursinus Weekly, September 26, 1902, the chief editor – Walter E. Hoffsommer – stated: “We want The Ursinus Weekly to be the voice of Ursinus College. As a staff we shall attempt to make it so.” This spirit of teamwork continues today in The Grizzly, thanks to the students who continue to make their voices heard in its pages.