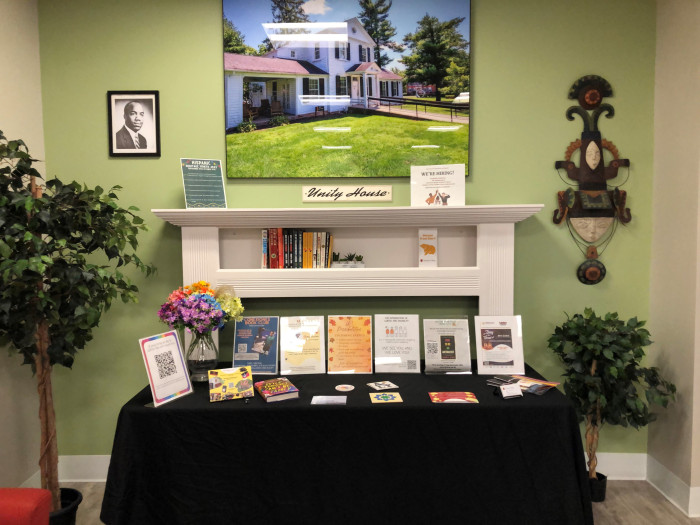 The fireplace mantel removed from Unity House before the building was razed in 2018 has found a new home in the Institute for Inclusion & Equity (IIE).

In September 2018, the much loved Unity House was demolished to prepare the way for the soon to be built Schellhase Commons. On a walk-through of Unity House before it was razed, I, as the Archives & Special Collections Librarian, was encouraged to choose things that I thought should be saved. I knew that we needed to preserve the special fireplace mantel that was located on right hand side of the main room. I also selected one of the distinctive black shutters from near the front door. The mantel and the shutter were delivered to the Ursinusiana Room on the second floor of Myrin in January 2019. The fireplace mantel, I thought, would be perfect relocated somewhere on campus where people could sit and read or study in front of it. With it there would be a warm memory of Unity House.

Unity House began its life as a boat house on the Perkiomen Creek in 1904. It was built by the Rev. Henry T. Spangler, retired third president of Ursinus College, as a family summer home. In 1914, it was moved to the Ursinus Campus, where it became known as Studio Cottage, the home of Miss Marion G. Spangler, daughter of Rev. Spangler and granddaughter of the first president of the College, President John H. A. Bomberger. Miss Spangler, an instructor of music, added a music room, and from that point on the home became a center of musical events on campus. Later several rooms were rented out to faculty and students before it became a residence hall for men, Then, in 1985, it housed the offices of Career Planning and Placement, Counseling Services and Education Services. In 1995, Studio Cottage was renovated and renamed Unity House to celebrate diversity on campus. Cultural paintings, sculptures, music, literature, and festivities adorned the common room. Eventually, the offices of Unity House were renamed the Institute for Inclusion and Equity (IIE) and moved to lower Wismer Hall to be more centrally located on the campus. At its official opening in January of 2018, the President’s Office said this: “As a central space for all students from equity-seeking groups, the IIE coordinates dialogue, programming, and activities around issues of equity, diversity, and social justice. The Institute thus supports the larger mission of the college, preparing students for leadership in an increasingly complex, diverse, and interdependent world.”

Though the IIE is better suited to its centralized location, the campus felt the loss of Unity House. Those items I saved back in 2018, the mantel and the shutter, stayed protected but hidden in the Ursinusiana Collection in Myrin. Then, in the summer of 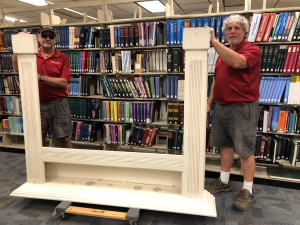 2022, after the CoVID pandemic had receded enough that the campus was fully back to life, I reached out Ashley Henderson, Director of the Institute for Inclusion and Equity, to see if the fireplace mantel might be able to find a more visible home in the IIE. She recognized its simple beauty and thought that this symbol of Unity House history would be a special addition to the IIE. The mantel was delivered and installed in early October 2022 before Homecoming Weekend. It now graces the wall of the IIE and looks lovely in its new home. It is exactly where it should be.