It was midnight on July 13, 2017, and Matt Weintraub was about to give one of the most important press conferences of his career. Weintraub had only been the district attorney of Bucks County for a few months before being thrust into a tragic and ghastly case that captured the attention of media around the country.

The case had become the lead story on the national nightly news, and Weintraub was appearing everywhere as the spokesperson. 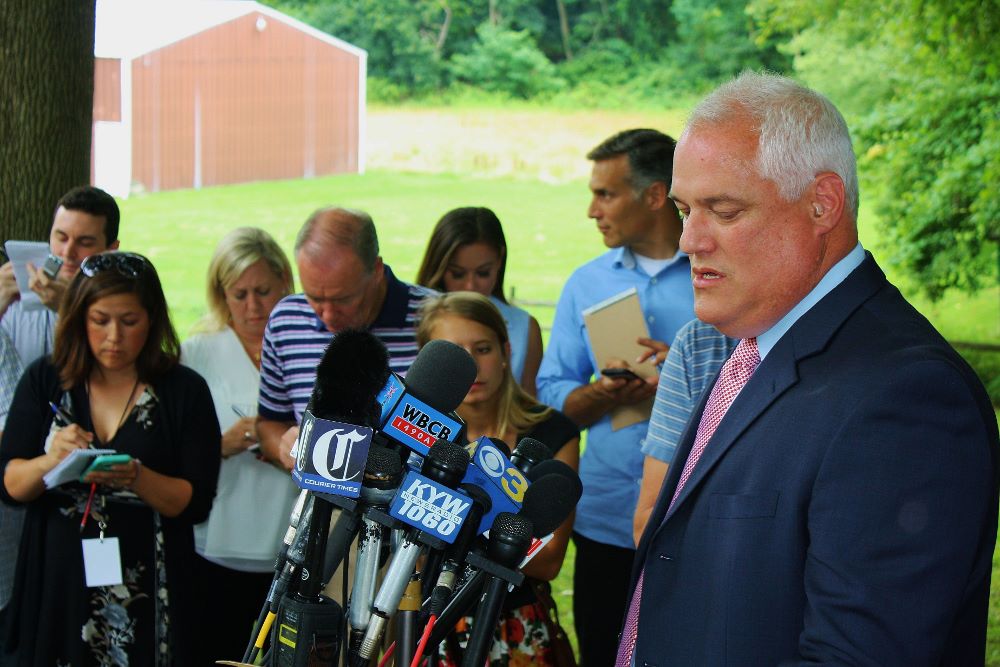 Weintraub News Conference. Photo courtesy of Larry R. King, Bucks County District Attorney's Office communications specialist.Four young men vanished and had been missing for about a week. On the night of the press conference, Weintraub announced that one of the men, just 19 years old, had been found dead. Police officers and FBI agents, following a lead, found his remains after digging a giant 12 1/2- foot hole on a farm in Solebury, Pa. Additional human remains, soon to be identified as two of the other young men, had also been recovered from the scene.

Weintraub, who had been investigating the case since the men had been reported missing the previous week, worked around the clock and was going on little to no sleep. Standing in front of the microphones with a throng of reporters and TV cameras surrounding him, Weintraub was somber. His eyes revealed the toll of the tragedy, but his voice was reassuring and confident.

“We are going to bring each and every one of these lost boys home to their families one way or another, and we will not rest until we do that,” Weintraub said.

“I am a bulldog and I can be a royal you-know-what.”

Less than a day later, all four bodies were found and identified, and two suspects were in custody. Cosmo DiNardo and his cousin Sean Kratz soon confessed to the murder of the four men on DiNardo’s family farm when the victims had come there to allegedly buy marijuana. The trial for both men is now set for November 2018.

A Bucks County native, Weintraub grew up in Southampton, Pa., not far from Solebury. He now lives in Doylestown with his wife, Kathleen, and their two daughters, Shayna, 15, and Chloe, 11.

Weintraub says he always felt a calling be a prosecutor, especially after four friends died in a tragic drunk driving accident during his senior year in high school. He chose to study politics at Ursinus and had enough credits to graduate after three and a half years in December 1989, but took a job putting siding on houses before officially accepting his diploma in the spring.

“Manual labor reaffirmed my desire to become a lawyer,” he says with a laugh.

Weintraub graduated from Temple Law in 1993 and quickly accepted a job as an assistant district attorney in Bucks County. After eight years, he briefly entered private practice (“My heart was never in it,” he admits), moved to the Lehigh County district attorney’s office, and then Cape May County in New Jersey, before coming back to Bucks County as chief of prosecution in 2011. When his predecessor retired in September 2016, he was appointed district attorney.

He ran successfully in November 2017, his first time ever running for a public office. Weintraub is in charge of 38 attorneys, 21 county detectives and 30 support personnel. His office handles 11,000 criminal cases a year, including 9,000 adult offenders and the rest juvenile offenders.

Although many of Weintraub’s duties are administrative, he still tries cases. And when he is in the courtroom, he aggressively goes after criminals.

“I am a bulldog and I can be a royal you-know-what,” he says. “But I am never unfair and it is never, ever personal. As long as I know my moral compass is true and I am seeking justice, I do what I have to do.”

Outside the courtroom, Weintraub’s demeanor is surprisingly low-key. He speaks slowly and deliberately, like a minister or rabbi having a chat on his front porch. His thoughtful approach is what makes him so unique at his job, as well as so successful.

“Matt preaches to every one of his prosecutors, that for any individual who is in contact with our office—whether it is a defendant or a victim—it is probably the worst day of their life,” explains First Assistant District Attorney Gregg Shore. “He constantly reminds us that we are all humans and we need to treat everybody as such.”

Indeed, many of the worst cases Weintraub has prosecuted throughout his career surround crimes so painful they could seemingly break the spirit of Satan—including young children being abused, toddlers accidently shooting themselves, and more drug overdoses than he can count. 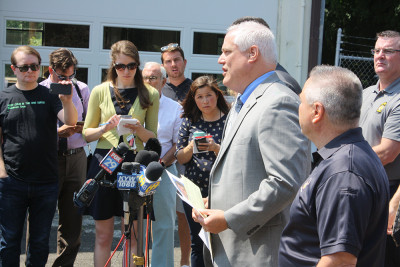 News Conference. Photo courtesy of Larry R. King, Bucks County District Attorney's Office communications specialist.“There are certain kinds of crimes that can cause you to have a very jaded and cynical view of humanity,” admits Weintraub. “But I believe, by and large, in the goodness of people. If you lose your compassion, you lose your humanity.”

At the height of the Solebury case, as families of the victims held vigils just outside the farm, Weintraub kept in communication with them, updating them on every step of the investigation.

“I had never before worked with a district attorney who was as genuine and open as Matt,” says Corporal James J. McFadden, one of the state police officers who worked at the scene of the crime. “The families [of the victims] responded to him because he was straightforward, but communicated with them so compassionately during the worst days of their lives. I’m not sure any other person could have done his job better.”

Weintraub is committed to not only prosecuting criminals, but also to proactively stopping crimes and overdoses from happening in the first place. He started a series of drug initiatives, such as making sure all police first responders carry Narcan, which can be used to treat and potentially reverse drug overdoses. He also started Ben’s Campaign, which provides free safety locks to gun owners to prevent deadly accidents in the home. He visits retirement homes, informing the residents about Internet and phone scams that target the elderly population for theft.

Weintraub also believes in the power of mentoring—going out of his way to guide and teach young district attorneys, particularly Ursinus graduates (see story at bottom).
“If I see Ursinus on a résumé, I definitely take a long second look,” Weintraub says.

Being visible and accessible to his community is one of Weintraub’s priorities. He hired Larry King, a former Philadelphia Inquirer reporter, as a criminal analyst and communications specialist for the office to help with criminal investigation as well as to work with reporters.

“Weintraub makes sure he is always as open and upfront as he can be with us about cases,” says one area journalist. “He makes us feel we are on the same side, as opposed to being in battle.”

Weintraub’s position is a four-year term, and he’s leaning toward running again in 2021. Higher political offices could certainly follow, he admits, but for now he believes in what he does, believes it is his calling, and truly just wants to do right by his people.

Resting on a bookshelf in his Doylestown office is a framed quote from a Teddy Roosevelt speech from 1910. Readers might know it as the “Man in the Arena.” It begins, “It is not the critic who counts, not the man who points how the strong man stumbles, or where the doer of deeds could have done them better. The credit belongs to the man who is actually in the arena, whose face is marred by dust and sweat and blood …”

“It’s my mantra,” Weintraub says simply. “My words to live by.” 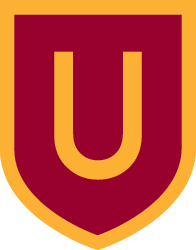 These days, the Bucks County district attorney’s office serves as a family reunion of sorts.

That is, an Ursinus family reunion. 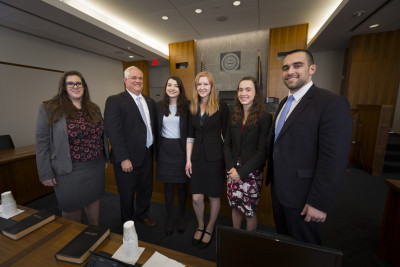 Three Ursinus College graduates work as assistant
district attorneys for Matt Weintraub: Jessica Bryant
'01, Kate Byrne '09 and Chris Decker '12. And, in
January, three current students had the opportunity
to shadow their Ursinus mentors thanks to the 2018
extern program: Olivia Byrne '21, Sienna Coleman '20
and Charlotte Rohrer '19.Learning from some of the brightest legal minds in the Philadelphia area was certainly an invaluable experience for the students, but with seven Bears in the courtroom, conversation naturally led back to Collegeville.

“Mr. Weintraub and the other Ursinus alums told us to enjoy our collegiate experience at Ursinus,” said Olivia Byrne, who is unrelated to Kate Byrne. “They also relived some of their finest memories and most fun times throughout their time at Ursinus.”

Talk of common professors and campus life aside, the chance to meet attorneys and watch trials gave the students plenty of insight into the legal profession.

“The externship reinforced my career goal of working with and helping people. It gave me confidence that I can find a job that is both demanding and rewarding,” Coleman said.

Rohrer added, “As a politics and international relations major, I have been part of the pre-law track at Ursinus, but wanted to see the practical side of the profession. [The externship experience] enforced that a good education will always get you far and that leaving your comfort zone, which is something lawyers have to do a lot, is pivotal to personal growth.”