Two Ursinus professors and their students are not only developing software that can detect when bullying is going on, but they are launching a website to offer a safe haven from the isolation that often comes with cyberbullying.

Spreading rumors or posting hurtful or threatening messages about others has led to depression, anxiety and serious mental health issues, including suicidal behavior, among teens.

Two Ursinus professors, Lynne Edwards ’88 and April Kontostathis, have been exploring this topic in some form for eight years. “That’s longer than most TV shows last,” notes Edwards, a media and communications professor. The lasting collaboration is resulting in some help for victims, as well as important research opportunities for Ursinus students. 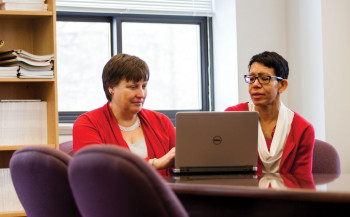 Professors April Kontostathis (l) and Lynne Edwards '88A two-pronged approach — a website, and software development — will provide a forum for shared experiences and will enhance the detection of cyberbullying.

One impact cyberbullying has upon the bullied is a sense of isolation. The U.S. government, on its www.cyberbullying.gov website points out that those likely to be bullied are already feeling some isolation, perceived as weak, are depressed, or are different from the social norm.

Testing whether victims would use an outlet for sharing, the professors set up a web site for two days. “The response was overwhelming; people emailed us and asked us for advice on specific problems they and their families were facing,” says Kontostathis, professor of math and computer science, and associate dean.

Recognizing the need for an ongoing platform for victims of cyberbullying and for parents and teens who want information and resources, they developed BullyCenter—a resources forum for discussion and shared experiences.

“Bullycenter.com will provide an online community for people who care about cyberbullying to talk to each other. It’s a place for cyberbullying victims, their parents, teachers, counselors and law enforcement to ask questions and share information,” Kontostathis says.

The team has a two-pronged approach to combatting cyberbulling - research and outreach.The communications research helps visitors better understand what causes a bully to become a bully in the first place and what goes on in the mind of a bullied child. As a hub for sharing, it is a place to learn how to overcome the suffering that follows cyberbullying.

“There is a blog as well that holds content for anyone interested in looking at news pertaining to the outcome of cyberbullying and even what others are doing to tackle the issue — such as a father who performed a personal rap song that’s meant to be personally uplifting,” says student Angel Bolanos ’18, who is developing the website. “Suffice it to say when you find yourself at the forefront of depression, it’s good to know you’re not alone.” 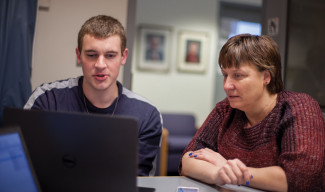 Ultimately, with their research, Edwards and Kontostathis aim to distinguish between the kid who intends to hurt another, and the kid who does not intend to cause harm. “Unfortunately, the onus is on the victim, so if nothing else, we hope to empower past, current and future victims to respond appropriately to cyberbullying,” Edwards says.

On a broader scale, they hope to support healthy identity development.

“A large part of developing a strong sense of self is knowing how to deal with obstacles and crises, cyberbullying included,” Edwards says. “I’m hoping our technology helps kids and parents respond in the best way possible and come out the other side, better and stronger.”

“Ultimately, we want to teach parents how to help their children if they ever become victimized, and we want to educate students on appropriate responses and methods to shut down the bullying,” Kontostathis says.

To capture a realistic picture of how students bully, Edwards and Kontostathis set up focus groups in a community afterschool social program, led by Ursinus students. The goal is to find out what kids in the real world are saying to each other, both in person and online, so they can use that language to test their theories and algorithms. By assessing cyberbullying through the eyes of young people, the team hopes to more accurately identify the definition of cyberbullying, as well as the websites cyberbullies use. 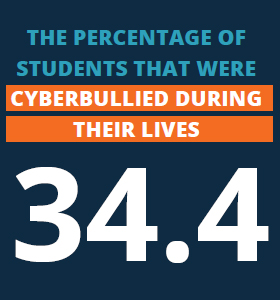 “Moving forward, I believe we will be able to stop incidences of cyberbullying earlier, before individuals feel the detrimental effects,” says Alexandra Montes ’18 of Pottstown, who is leading the focus group discussions.

They’ve just started to collect data, but so far, five focus groups of youths ages ranging from 10 years old to college age have uncovered some interesting anecdotes. For one, youths from different racial and economic class groups perceive bullying differently — some treating the words more casually than others.

“I’ve seen that the instances of cyberbullying occurring are starkly different between groups of youth,” said Montes. “The LGBTQ group reported more personal experiences with cyberbullying. However, overall, the cases of cyberbullying could be either done publicly, so that other users of that social media can see the bully’s actions, or privately, meaning that the interaction is only seen by the bully and the bullied. 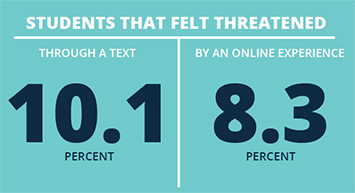 “Some of the participants classified the public form of cyberbullying to be more detrimental due to other individuals potentially joining the cyberbullying activities or carrying them into face-to-face interactions,” she said.

The group has found kids are standing up for each other. “Several kids have related stories about witnessing fellow students and groups of students defending the victims and shutting the bullying down,” Edwards says. “This is both heartening and encouraging.”

Part of the team’s focus is to improve upon measures already in place. “There’s lots of child protection and content blocking software out there, but the reviews aren’t good,” Kontostathis says. “Parents are fed up with it.” 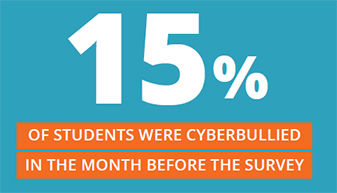 Funded by a National Science Foundation commercializiation grant called iCorps, Kontostathis and Edwards set out to develop a software that can detect cyberpredation and cyberbullying more accurately than the current packages.

One of the challenges the researchers face is digging into the nuances, rather than taking texts at face value. “We really want to be able to understand the difference between what students think of as trash talking versus actual bullying,” Kontostathis says. “There is some interesting psychology around this: are you bullied if the person intends harm or simply if you perceive harm, even when no harm was intended? We hope to navigate these nuances with our software, to monitor the context of conversations rather than just flagging keywords,” she says.

To do this, Kontostathis and her team have given free phones to study participants.The participants signed consent forms allowing the researchers to collect all their incoming and outgoing texts as data. The phone captures all text messages for later analysis. 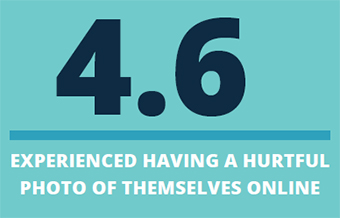 Right now, the team is creating software for pre-teen social media platforms rather than individual cell phones or devices. “The software uses a detection algorithm to find cyberbullying in social media posts,” explains Bryan Bradley ’17, a computer science major who is working on the cyberbullying detection algorithms. He and the other students, such as Corrine Capodanno ’16, are manually looking through raw data, such as texts. They assign scores as to the pejorative degree of the phrases and words. The students made their own dictionary, which included poor spelling and words which included asterisks in the spelling. The algorithm now is correctly identifying cyberbullying, but they are seeking more accuracy.

Ursinus student Montes reports, “Our research mainly revolved around how students perceive cyberbullying and self-disclosure to be defined. I found in the focus group that very few individuals knew what self-disclosure meant — this included our group of college-age students. Additionally, since all of the groups we are working with have grown up engrossed in technology their entire lives, the group as a whole possesses a high level of technological intelligence — both how to use the new social media sites and how their interactions are perceived on these sites.”

How the project evolved 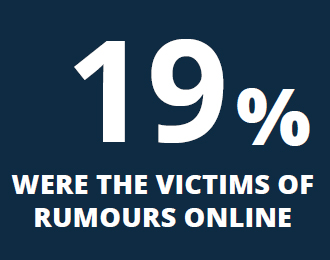 The collaborative research project stems from a student’s interest in the issue of cyberpredation. Eight years ago one of Edwards’ students explored the idea of setting up a dummy website to attract online predators so she could study them. While Edwards put the brakes on that to protect the student’s personal safety, her interest in cybercrime was piqued. She looked at some archived transcripts from a mainstream cyberpredation website, but could not recommend that to her student because of the nature of the conversations.

So she enlisted the help of her trusted colleague, Kontostathis. “I said, please create a computer program to assist with text analysis because I can’t have my students reading this,” Edwards says.

Kontostathis and her students created software to do just that, and the student, who is now an attorney, performed an analysis that was informed by the communication theory developed by Edwards.

The first NSF grant targeted both predation and bullying, but the research quickly took the cyberbullying path. “From the social science side, I am really aware of people’s fears and concerns about cyberpredation, but I know cyberbullying is actually more of an immediate concern,” Edwards says. So the two professors focused their research accordingly; the most recent NSF grant funds cyberbullying research alone.

Edwards says cyberbullying is an immediate concern for a number of reasons. “For one, some online fights don’t stay online, and they lead to physical altercations. There are also instances where cyberbullying actually leads a child to commit suicide,” she adds. “We want to put a stop to negative consequences of cyberbullying and teach kids how to respond appropriately, in a way that strengthens their self-esteem.”

Elizabeth Shimer Bowers is a freelance writer in Bethlehem, Pa who specializes in health and medicine, science, and psychology. She has written for numerous publications, including Prevention magazine, WebMD, and Runner’s World, as well as colleges and universities.